Latest Ad Block Usage and Statistics You Need to Know [2022]

Advertisements that appear when scrolling down the screen can be bothersome at times.

As a result, Internet users have begun to utilize the browser plugin Ad blockers, which may be configured to avoid irrelevant ads that they would never intend to purchase.

Do you know that adblocking stats are really impressive recently?

Adblocking usage varies by region and demographic, but some general trends and statistics include:

Having said that, many people are still uncomfortable with how businesses use their data to include them as significant leads.

Most consumers today would even pay subscription fees to avoid ads on online platforms such as YouTube, which just launched a premium plan for users to disable ads.

In fact, according to recent research of 2022, 42.7% of Internet users frequently use ad-blocking software.

To provide you with a fact-based insight into the current statistics and trends regarding ad blocking, this article contains current facts you need to know.

Over 27% of US customers are anticipated to use ad blockers by 2022.

For more detailed data, here’s a table of the usage rates by year.

Demographic Statistics on Internet Ad Blockers in the United States

With a 41% usage rate, ad blockers are most common among young Internet users aged 18 to 24 while only 15.6% of those aged 65 and up use ad-blocking software. Data also have shown that kids ages 0 to 11 have the lowest usage rate of 5.3%

In addition, US internet users almost had an equal percentage in groups ages 34 to 44 and 45 to 54.

The following is a detailed overview of adblocking usage by age group:

Data below shows the usage rates by gender group:

Statistics of Ad blocker usage in the United States by device

According to a 2021 survey, 51% of US respondents use ad blockers on their Desktop computers and 30% use ad-blocking software tools on their cellphones.

Ad-blocking software is widely used by computer users in the United States, with usage steadily increasing year after year, with 51% being the highest usage rate since 2017. On the other hand, Ad blockers using smartphones only has 30% highest usage rate for the past 5 years.

Furthermore, the average usage rate for Computers since 2017 is 48% and 29% for smartphones.

The United States, United Kingdom, Germany, Denmark, Sweden, Norway, and Finland are just a few of the countries that use ad blockers to whitelist websites in order to access content on the internet.

According to current research, 62% of Internet users in Finland use ad blockers to whitelist websites, mostly because the content is blocked when the ad blocker is enabled.

Despite a substantial increase in the use of ad-blocking tools, Germany has the lowest rate of internet users (39%), compared to other countries.

By clicking the button, you accept our Terms & Conditions. Also you will need to confirm your email address.

Why do people whitelist websites?

Statistics of Adblockers from the different continents

Statistics of Adblocking of 46 countries

At least 40% of the whole population makes use of adblockers and is still expected to go higher over the next years.

Indonesia has the highest rate of adblockers at 56.80%, accounting for over half of their country’s internet user population, followed by India at 50.70%, South Africa at 49.20%, and so on.

Here is a list of all 46 nations surveyed by Hootsuite, ranked by the percentage of internet users aged 16 to 64 who use ad blockers:

List of countries and usage of ad blocking software

Ad blockers cost publishers $35 billion in lost ad revenue in 2020. A study by OnAudience reports that in 2017, global ad revenue losses due to Adblock were estimated to be $42 billion.

Adblock losses can be disastrous to a smaller blogger, YouTuber, niche content, or local news site, sparking interest in AdBlock and bypassing the publisher business.

Losses from adblockers can exceed the cost of many staff positions for a large news publisher with 1 million or more visits per month; even seven-digit losses are caused by adblockers, making it difficult for publishers to produce the same level of quality content.

From 2016 to 2020, statistic shows the financial impact of ad-blocking usage in the United States. According to estimates of Statista, the revenue lost due to ad blocking gradually increase from around 3.89 billion US dollars in 2016 to 12.12 billion in 2020. 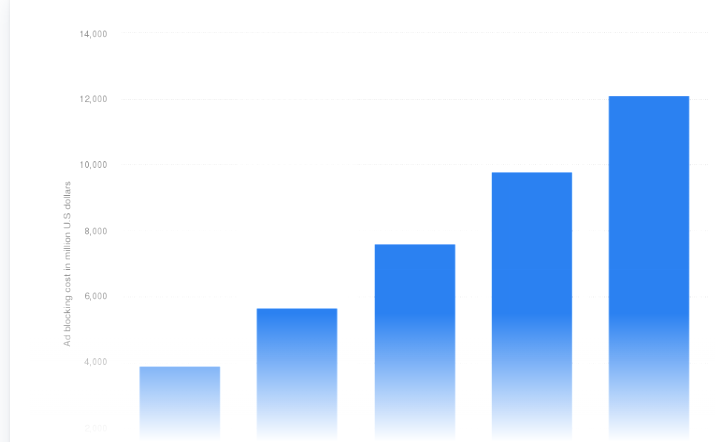 What do websites against adblockers?

Websites loose revenue because of this. And there are businesses who only rely on advertising as a source of revenue.

The adblocking business became a business itself. There are companies building adblocking software and making money out of that.

It’s difficult to determine a “winner” in the adblocking software market, as different adblockers may be more popular or widely used in different regions or among different groups of users.

Some of the most well-known adblockers include Adblock Plus, uBlock Origin, and Ghostery.

They come in various formats but the most used are:

Do you use adblocking software? What’s your experience with it?

Check our Ecommerce Marketing Calendar for 2023

Latest Ad Block Usage and Statistics You Need to Know [2022]

11 designs of Thank You Page examples for Shopify

Laura is a Marketing Specialist with experience in Digital Marketing and Ecommerce. She's doing a lot of research and writing about Marketing Automation and Digital marketing in general.

Sign up to our newsletter to get the latest articles sent right to your inbox!

Ready to get started?
Get in touch or start a Free Trial
Get In Touch Register Now
Vibetrace